Questions About Georgia: The Definitive Guide

Odyssey Traveller specialises in crafting unforgettable experiences for mature-aged travellers, providing adventure and educational programs to small groups since 1983. Odyssey has built up a reasonable knowledge bank to answer questions about Georgia that travellers are likely to ask, as they make their plans to tour independently, or with us as part of a small group tour. We hope that this list of frequently asked questions and the answers we provide will help you with planning your next holiday.

Read on, but please do not hesitate to contact us via the website, or through email or chat if you have more questions about Georgia or our other tours. 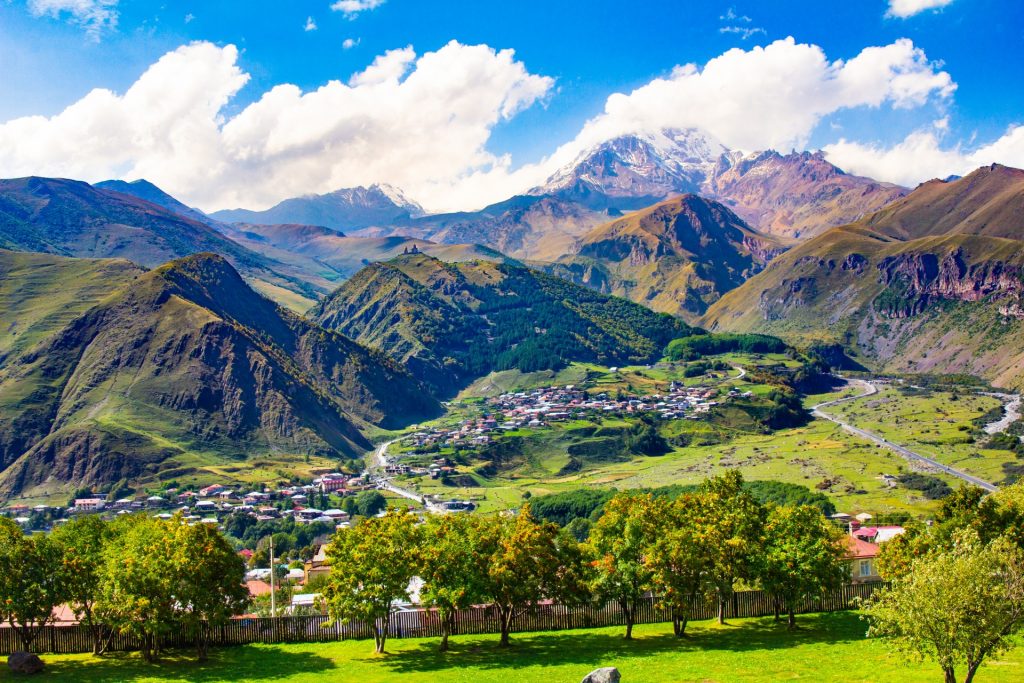 Where is Georgia on the map?

Georgia is located in the Caucasus, a mountainous region located between the Black Sea (to the west) and the Caspian Sea (to the east). The Caucasus is the eastern-most region of Europe, and is a region of cultural exchange between the Middle East, Central Asia, and Russia.

Georgia is bordered by Russia to the north, Azerbaijan to the east, Armenia and Turkey to the south, and the Black Sea to the west.

How did Georgia get its name?

In their native tongue, Georgians refer to themselves as the Kartveli and to their country as Sakartvelo. However, the country has long been referred to as ‘Georgia’ in English. This is because the patron saint of the Kartveli is St. George, a Roman soldier who was executed for refusing to recant his Christianity.

Historians suggest that when the crusaders came through the region in the Middle Ages, they named the country Georgia after St. George – whose depictions in the art and architecture of the region were inescapable. Others suggest that the various conquerors of Georgia – Persians and Ottomans – named the region after the patron saint of its inhabitants, Gorj and Gurju, respectively. This became Gruzia in Russian, which was then Latinised as Georgia at some point in the Late Middle Ages.

Ironically, the popularity of the name George in Europe was inspired by the crusaders visit to Georgia. Inspired by the widespread veneration of George in the East, particularly in Georgia, crusaders started naming their children George, and George became the patron saint of England in 1340.

When did Georgia become Christian?

Georgia was one of the first countries to embrace Christianity, in 337 AD. Throughout antiquity Georgia was known as the Kingdom of Iberia. Though technically independent, Iberia had in reality been under the influence of either Ancient Rome or Ancient Persia.

In AD 298 Rome signed a treaty with Persia, which recognised the Persian-born Mirian III as the king of Iveria, or Georgia. He founded the Chosroid dynasty which ruled for over two centuries. In 337, Mirian, following his wife Nana, was converted to Christianity by the holy slave Nino. Georgia became the world’s third Christian state, preceded only by Armenia (AD 301) and Ethiopia (AD 330).

Though Georgia would be ruled by a succession of Zoroastrian and Muslim leaders, the people of Georgia have remained consistently Christian. Today, the majority of Georgian Christians are part of the Georgian Orthodox Church, which is in full communion with the other churches of Orthodox Christianity. 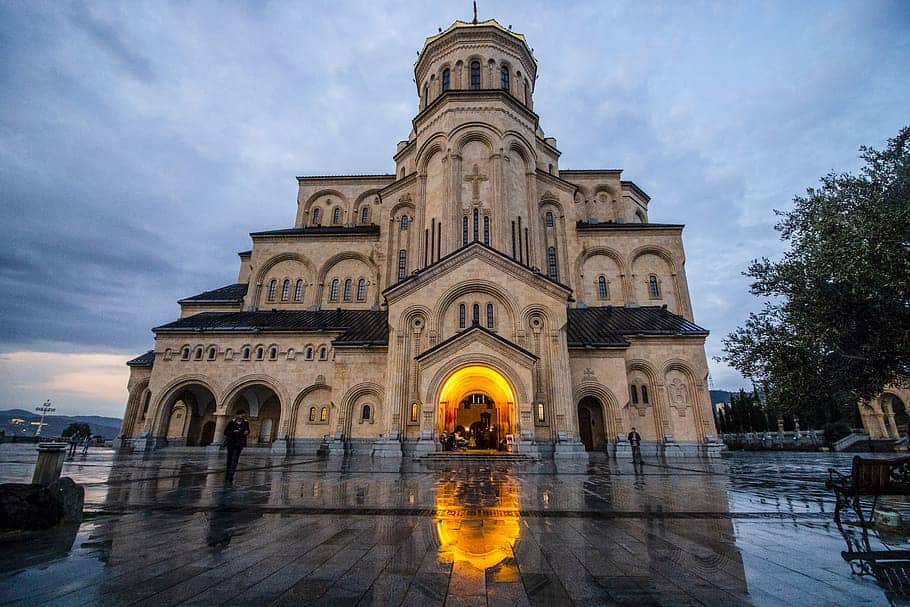 A church in Tbilisi

When did Georgia get independence?

Georgia has had a number of periods of independence. While the Chosroid dynasty fell in the 6th century, and Georgia fell under the influence of Persia, Byzantium, and the Arab caliphs, the country again became independent at the end of the 9th century.

The period of independence in the Middle Ages is today known as the country’s ‘golden age’. The ‘golden age’ saw the creation of important works of Georgian literature, particularly the national poem Vepkhistqaosani or ‘The Knight in the Panther Skin’, which was composed by Shota Rustaveli at the end of the 12th century. This period also saw the construction of Georgia’s greatest monasteries and churches, as Georgia became a centre of religious learning.

Under Tamar (1184-1213) the kingdom reached its greatest extent, stretching from the Black Sea to the Caspian, and from today’s Turkey to southern Russia. In a time when it was rare for women to have power, Tamar was regarded as a strong and successful ruler. Under the command of her second husband, David Soslan, Georgia’s armies took parts of Azerbaijan and defeated the Sultanate of Rum, located in current-day Turkey. She received the respect of famous rulers, including the Russian Ivan the Terrible (who claimed she was ‘endowed with the intelligence and courage of a man’) and Saladin, who immediately bowed to her request that he recover items from Georgian monasteries when he retook Jerusalem from the Crusaders in 1187.

However, the Golden Age came to an end with the Mongol invasions beginning in 1220. Georgia was divided between the Ottoman Empire and Persia for centuries. In the 19th century, Georgia came under Russian rule.

In the late 19th century, Georgia experienced a national revival. Georgian independence was briefly recognised in 1920, but in 1921 the Red Army entered Georgia and Georgia became part of the Soviet Union.

While Stalin might be the most famous Georgian in history, his home country escaped none of his repressions. Nationalism was suppressed, local members of the Communist Party were purged, and Georgian peasants suffered from the collectivisation of agriculture.

During the Soviet period, Georgia transformed from an agricultural nation to a largely urban and industrial one. Following Stalin’s death, the Soviets encouraged the Georgian language, enabling the redevelopment of a Georgian nationalism.

Georgia became independent following the dissolution of the Soviet Union in 1991.

For more on the history of Georgia, check out our article: Discovering Georgia.

What is Georgia known for?

Where to visit in Georgia?

As one of the earliest Christian states, Georgia is home to several ancient monasteries. Particular highlights include:

Receive a AUD$350 voucher towards your first small group tour
Join
What food is Georgia known for?

Georgian cuisine is a mix of influences from Eastern Europe, the Middle East, and the Caucasus. The unofficial national food is khinkali, or soup-filled dumplings. Also iconic is khachapuri, freshly cooked bread filled with warm cheese and sometimes topped with an egg.

Is it safe to visit Georgia?

Absolutely! While the seceded zones of South Ossetia and Abkhazia (now ‘protected’ by Russia) are closed to tourists, the rest of Georgia is totally safe to visit. In fact, crime rates are lower here than in most of Western Europe and tourists are rare enough that the scams found elsewhere are unknown.

For a small country, Georgia has a surprising diversity of climates. The Caucasus has an alpine climate, with chilly temperatures ranging from -4C in January to 14C in July and August, though parts get as cold as -30 in winter.

In Tbilisi, winter is warmer, but still chilly, with an average maximum temperature of around 6. Summers can be balmy, with average maximums of around 31, but are nonetheless the most popular time for visitors.

What is the best way to visit Georgia?

Residents of Australia, the European Union, the USA, Canada, New Zealand and many other countries do not require visas for visits to Georgia of up to a year.

Several airlines fly from Australia to Tbilisi, most with a stopover somewhere in the Middle East.

If you’re interested in visiting Georgia, think about joining Odyssey’s Tour of the Caucasus. Designed for active mature and senior travellers, our small group tour encompasses Georgia, along with neighbouring Azerbaijan and Armenia. In Georgia, the tour stops in Tbilisi, and visits the Varzia and Gelati monasteries among other sites. The tour also includes visits to local wine and food manufacturers.

This program is designed to give people an opportunity to explore Tbilisi, Baku, Yerevan as well as important monuments, historical and religious sites, diverse landscapes and ancient architecture by visiting the Caucasus Mountains and the lowlands of Armenia, Georgia and Azerbaijan. Led by local English speaking guides, there will be the opportunity to meet local people.

Travel on the Silk Road with Odyssey Traveller

The Silk Road is an ancient trade route linking China and Imperial Rome through Central Asia. Few areas in the world remain as unexplored or offer such richness in terms of ancient and modern history, culture, and scenic diversity as Central Asia. Our itinerary explores the Silk Road through remote deserts and mountainous environments as we visit key sites between Xi’an and Bukhara.

29 days
Asia and the Orient
Departing Aug, May

This program traverses this expanse, from Ulaanbaatar to St Petersburg; from the Mongolian Steppes to Siberian taiga and tundra; over the Ural Mountains that divide Asia and Europe to the waterways of Golden Ring. Our program uses two of the great rail journeys of the world; the Trans Mongolian Express and the Trans Siberian Express.